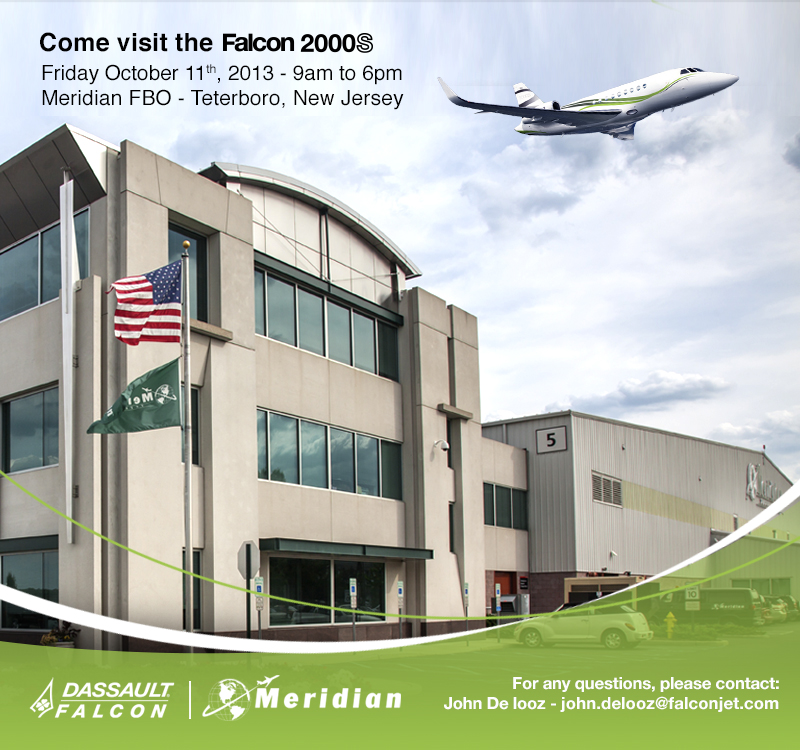 On Friday, October 11, Dassault Falcon Jet and Meridian Teterboro partnered to create a special event that featured the all new Falcon 2000S on static display, and included interesting presentations that highlighted the storied histories of both companies. The static display took place on the Meridian ramp, while the presentations were shown inside the Executive Terminal. In addition to having Dassualt representatives on-hand to answer questions about the aircraft, food and drinks were served, which also included wine from Chateau Dassault, the jet manufacturer’s own vineyard.

True to its heritage, the 2000S is a work of craftsmanship, passion and a century of savoir-faire blended into one. With an Award Winning Cabin* that is 25% larger and more comfortable than other Super-Mids and the operating costs of an aircraft half its size, the 2000S seeks to redefine the super midsize concept.

Next week, the aircraft will be flown to Las Vegas, NV to be featured in the static display at NBAA2013 Business Aviation Convention & Exhibition, the industry’s annual flagship event.

*Award for Design Excellence given by the Chicago Athenaeum Museum of Architecture and Design and
the European Center for Architecture, Art and Urban Studies

On Thursday, July 11, 2013, NBAA held its Denver Regional Forum at Centennial Airport (APA). Meridian, which has an aircraft based at Centennial, made a strong showing at the event last week with a team of seven to represent the company at both the exhibit booth and static display. Starting on Wednesday, July 10, Meridian introduced its newest Aviation Sales Executive, Todd Schieck, at the Colorado Business Aviation Association (CABA) Golf Tournament held at the Inverness Hotel & Golf Club. Todd joined Meridian on July 1, 2013 from M&N Aviation, and has already hit the ground running. Meridian sponsored Hole 9 at the CABA event, where Mr. Schieck and fellow colleague Anthony Banome greeted golfers and offered refreshments.

The following day, Meridian participated in the NBAA Regional Forum with an exhibition booth and an aircraft on the static display. The 13-seat business jet, a Falcon 900EX EASy, is a long range aircraft that has been beautifully refurbished and equipped with Wi-Fi. Dennis O’Connell, Meridian Air Charter President, had this to say, “The Denver market is an important and growing region for business aviation because of its leadership in the new energy economy. Meridian’s strong presence here was designed to raise awareness of our aircraft based at APA, and to announce that we now have charter sales representation based locally. We want the world to know that we are open for business in Denver.”

The forum was a success with a total of 974 attendees and 73 exhibitors. The full agenda included an update by NBAA President and CEO Ed Bolen, presentations on topics including the business aircraft purchase and sale process; aircraft ownership and operations; the new FileSmart educational initiative and information on preserving FAA medical certification. Also on site was a static display of 14 aircraft, including Meridian’s Falcon 900EX EASy. The evening before the event, the Colorado Aviation Business Association held a series of mentoring sessions with high school students, and Jeppesen sponsored a reception that included tours of its training facility. Meridian will be attending the next NBAA Business Aviation Regional Forum, which will be held on September 12 at Waukegan Regional Airport (UGN), near Chicago, IL.

San Jose, CA – On July 14, 2011, Meridian Teterboro proudly participated in the NBAA Regional Forum held at the San Jose International Airport (SJC) in San Jose, CA. The event provided a great venue to network with other colleagues in the aviation industry, and offered Meridian a unique opportunity to meet prospective West Coast customers and vendors. The event featured dozens of exhibitors and an impressive static display.
Unlike the heatwave experienced at the NBAA Regional Forum in White Plains last month, the weather was much cooler, with clear and sunny skies in San Jose. Meridian is full-service private jet company located at Teterboro Airport, NJ (TEB), just minutes from New York City. Featured services include an FBO, charter sales, aircraft maintenance, and aircraft sales and management.
We use cookies on our website to give you the most relevant experience by remembering your preferences and repeat visits. By clicking “Accept”, you consent to the use of ALL the cookies.
Do not sell my personal information.
Cookie SettingsAccept
Manage consent